At the Copa Slots 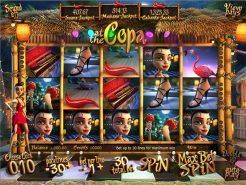 Play Now
In the words of a famous song, this incredible 3D slot has been created bringing dancing femme fatales and handsome males to the screens of players. There are five reels and thirty paylines in this colorful slots game where Carolina is the main dancing character that fills the screen and directs the reels as they spin from the side of the screen. There is a wild symbol that expands when landing on reel three to give players a re-spin and with each re-spin an additional multiplier is awarded to players up to a maximum of 5x. The wild behaves as a normal wild in all the other reels and can replace any other symbols to make up a winning line. The scatter symbol is denoted by the high heeled sandals. Three or more of these on the screen awards players 10 free spins but first they are taken to a new screen to choose a dance partner and a competition follows. Depending on the chosen partner and the placing in the competition, players can win from 2-10x multiplier for their free spins. An instant win bonus round is triggered when two different male dancers land next to the beautiful Carolina; players are then invited to pick different objects to win bonus payouts.

At The Copa Slots News

Where to Play At The Copa Slots

At The Copa Slots Info